Delaying Marriage, But Not Cohabitation

Americans are waiting longer to marry, and are more likely than ever before to cohabit before marriage. But are they delaying cohabitation as much as they're delaying marriage? Data on that question are scarce; cohabitation is a relatively new phenomenon, and even the Census and the U.S. Current Population Survey don't have much information about it.

But Wendy Manning, Susan Brown, and Krista Payne at Bowling Green's National Center for Family & Marriage Research managed to tease out the answer using a few decades of data from the National Survey of Families and Households and the National Survey of Family Growth. They present their findings in a new working paper, and the answer is no: "the trends toward delayed marriage entry do not extend to cohabitation."

Median age at marriage rose by roughly three years between the 1980s and the late 2000s, as the below charts show, but median age at cohabitation remained stable or slightly declined. (Data for men and women are displayed separately because the time windows varied for the two.) 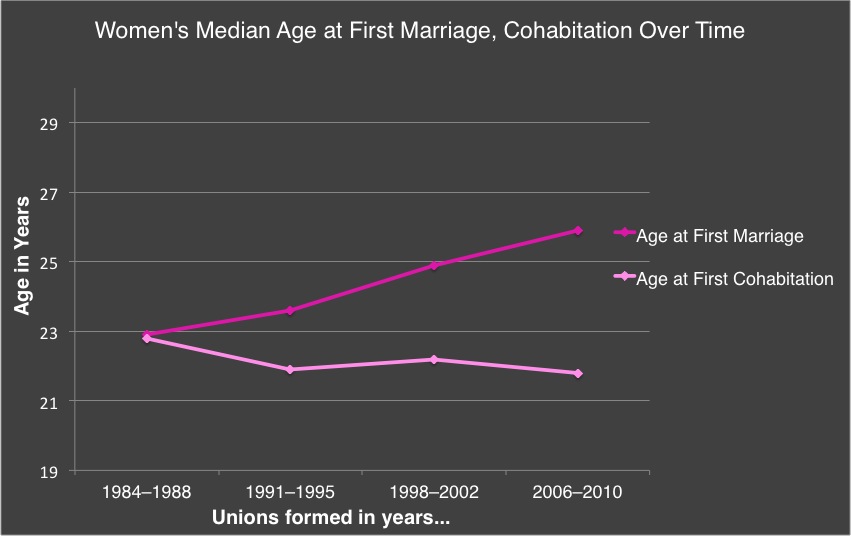 Thus, the researchers write, "over a 20-year span women and men were still forming first unions at roughly the same ages," around age 22 for women and age 22.5 for men. It's just that people's first unions are now more likely to be cohabitation, rather than marriage. Almost 75% of women's first unions formed in the late 2000s were cohabiting, up from 58% two decades ago. 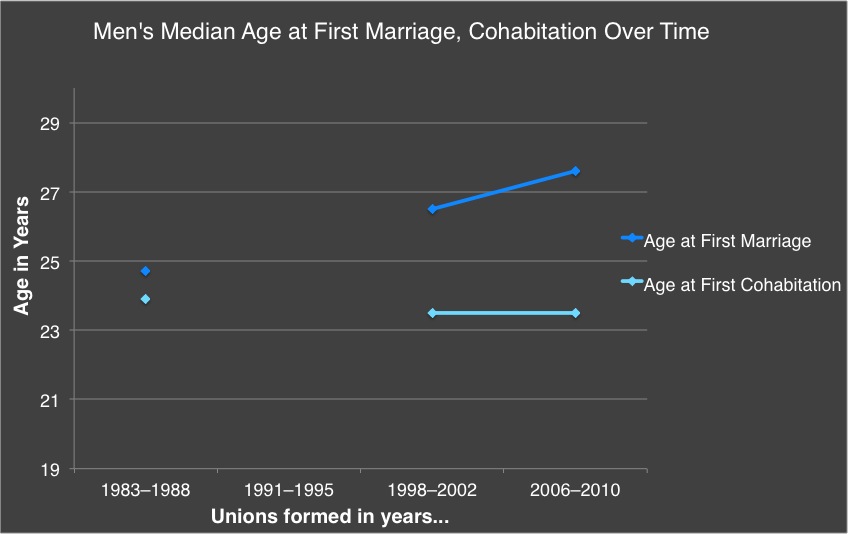 Few differences emerged between different races or ethnicities. Break down the data by educational attainment, however, and the story changes: even as the education age gap at marriage has closed, there remains a six-year gap in union formation between the least and most educated Americans.

Across the decades they studied, those without a high school diploma form their first union (usually cohabitation) around age 19 for women and age 21 for men, while those with at least a bachelor's degree do the same around age 25 for women and 26 for men. Compare high school graduates to college graduates and the gap narrows to three or four years (rather than six), but remains. In short, educated people are delaying cohabitation along with marriage, while those with less education are delaying marriage but not cohabitation.

As Manning and her colleagues suggest, this isn't good news: "Given the greater instability of cohabiting unions and that fewer cohabiting unions eventuate in marriage, we believe these patterns suggest greater opportunities for serial cohabitation. As a consequence, young adults today will have more complex relationship biographies which may have implications for their own well-being as well as their offspring."

Or as Scott Stanley has phrased it on this blog, what happens in the Las Vegas of pre-marital life doesn't stay there.