Life Before Marriage: Does What Happens in Vegas Stay in Vegas?

People are getting married ever later, with the average age of marriage in the U.S. hovering around 29 for men and 27 for women. Many people marry earlier, some later, and a growing number will not marry at all. But for the most part, people hope to settle down into a committed relationship with one partner, typically within marriage (even if it’s more of a goal than a reality for many).

Many people marry earlier, some later, and a growing number will not marry at all.

In the late 1990s, I heard sociologist David Popenoe make a brilliant observation out of a few obvious facts. He noted that there was an increasingly long period of time in human development between when people mature sexually and when they marry. This growing period of time would, he observed, provide the average American young person with a lot of practice at being non-monogamous (or, at best, serious experience with serial monogamy). He suggested that this would undermine success in marriage.

So does what happens in Vegas stay in Vegas? Most of the time, no. What happens in romantic and sexual relationships before one settles down can negatively impact the options one will have moving forward in life. But many people do not believe that, as it runs counter to the tide of messages, media, and culture that support the Vegas Syndrome.

I had been searching for a way to depict my point about Vegas, and finally I hit on the idea of drawing some simple figures, which are below. Great art? No. Do they help me make my point? You decide.

In the first figure, you can see a green line going upward over time. Let’s say that depicts idyllic growth when it comes to romantic relationships and marriage. The Y-axis is meant to represent an abstract good, which for our purposes here, I will call “success in life-long love.” What the first figure depicts is a path moving smoothly and continuously toward achieving this goal that most people hold dear. 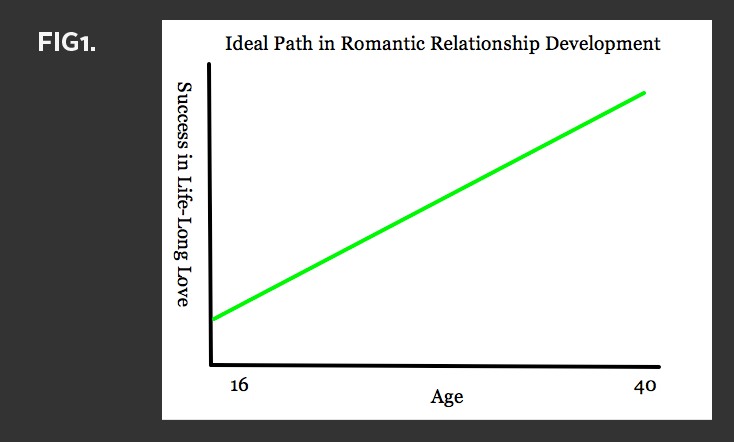 Next, let’s make that green line a bit wiggly instead of straight, because almost no one’s love life proceeds as smoothly as depicted in that first picture. 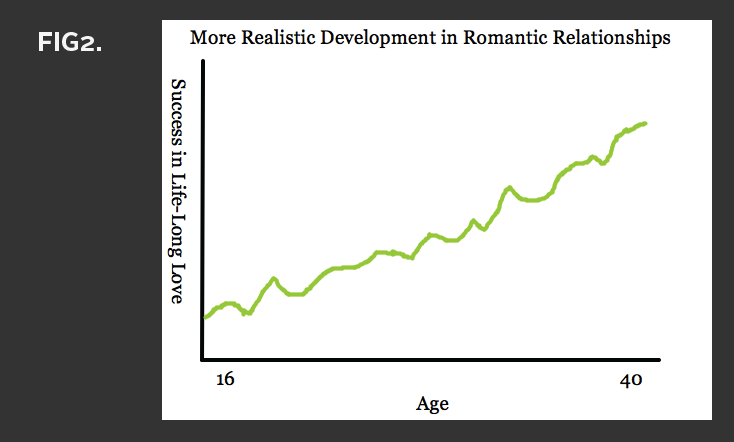 Now, contrast that drawing with the next, which has a jagged red line during young adulthood to represent some serious romantic ups and downs. By the early 30s, however, the line shows that romantic life is back on a smooth green line: it has resumed a smooth course of development. The period of life represented by the jagged red line could include any or all of the following events: 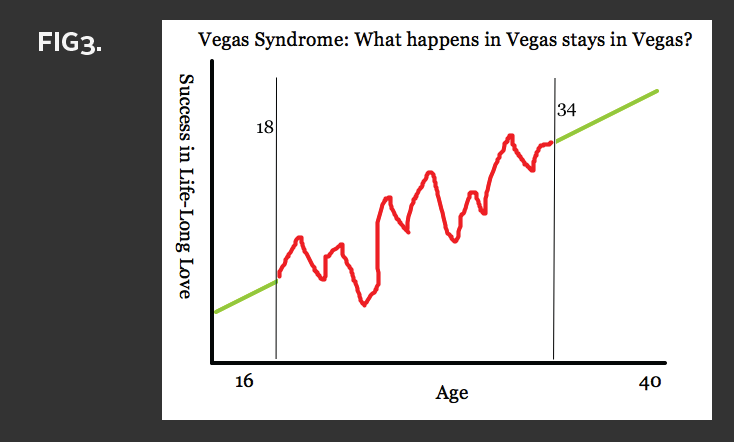 This drawing expresses my theory about what I think is a widespread belief: that people can go through their 20s and follow that red line up and down, and when they’re ready to settle down, they can hop right back on the green line as if nothing had happened in the past couple decades. That belief is the essence of the Vegas Syndrome: “whatever I do in my love life before I settle down has no bearing on the rest of my life.” Multiple serious relationships, sexual hook-ups, cohabiting partnerships, having a child or two—none of this will impact one’s marriage or future relationships, in this view. It’s Vegas.

Scientifically, however, all of these things are associated with greater risks to marital satisfaction and stability. There are, of course, some people who have all these experiences without serious mishaps, and there are others who avoid all these experiences and nevertheless struggle in marriage. Experiences are not destiny, but cohabitation, having children before tying the knot, and accumulating a large number of sexual partners are reliably associated with greater risks for struggles in marriage.

There are volumes written on each factor, but let’s look at just one in more detail. Having a greater number of sexual partners before marriage is associated with greater odds of divorce and greater odds of marital infidelity. In social science circles, the argument that quickly follows the presentation of such associations is about selection. Some are quick to suggest that those with more sexual partners are not at greater risk in marriage because they had more sexual partners but because of other factors, such as family instability growing up, that make them more likely both to have greater numbers of sexual partners and to face difficulties in marriages. There is some truth to such arguments, but it is naïve to press that idea to the extreme. In my view, it’s not reasonable to assert that a person picks up no added risks in life when dealing with the emotional, physical, financial, and mental repercussions of having multiple sexual partners within just a few years. And when adults who already have children continue moving from one romantic relationship to the next, it’s not remotely arguable that their choices do not expose their children to greater risks.

I think something like the next figure is closer to reality for too many people who treat young adulthood like Las Vegas. It suggests that what happens in the Vegas of early adulthood may refuse to remain there. Their romantic experiences and choices as teens and young adults impact their future relationships. 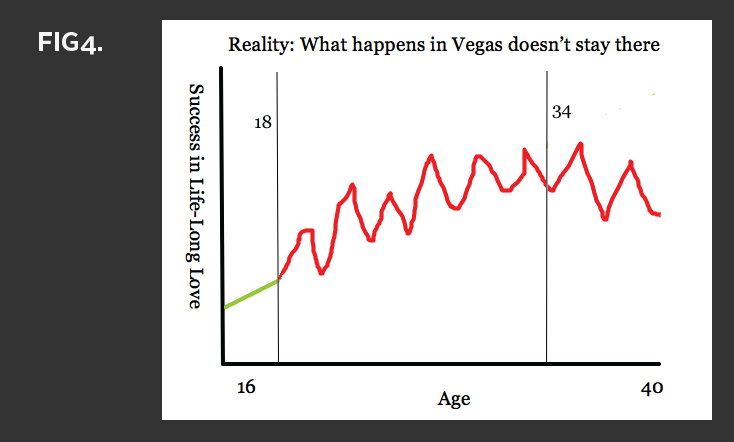 Granted, not everyone is subject to Vegas Syndrome. In fact, there is clear evidence of an economic/opportunity divide on this. People with greater advantages, on average, seem to be more careful about their time in Vegas: they’re more likely to prioritize their education above serious romantic relationships, and less likely to have children before getting married. Experts I trust believe that those with more advantages have greater motivation (and awareness) about protecting those advantages, which is one explanation (but only one) for why college graduates are most likely to pursue traditional pathways of family development.

In thinking about this, I’m suggesting something pretty simple and not very radical. More people should think about what is going on in their love lives, proceed more slowly, and make conscious decisions in their relationships rather than just letting things slide.

Casino owners in Las Vegas want you to think you can do whatever you want and leave with all your options intact. But that’s not reality. You’ll at least leave with a lighter wallet. Maybe one’s love life is like the real Vegas. The average man and woman leave with fewer resources for managing their future than they had before going there.

In real-life Vegas, loads of people are happy to make that tradeoff because they’re having a good time and can afford to lose a bit of money. But would you make a similar tradeoff in your love life? How often do the good times of the Vegas era put limits on genuine aspirations people have for building a life of lasting love and family stability? Is there a magical place in a person’s love life where nothing one does matters? That’s what Vegas is selling. Do you think life really works that way for most people? Will it work that way for you?