A few decades ago, teens and their parents often debated family rules around curfews, going out with friends, and using the car. Although these issues still arise, the most fraught discussions in many families are now centered on a different concern: electronic devices.

According to Pew Research Center, 95% of 13- to 17-year-olds have access to a smartphone. Between 2009 and 2017, the number of 8th graders using social media every day rose from 46% to 78%, and the time high school students spent online doubled. Common Sense Media estimates that children ages 8 to 12 spent five and a half hours a day on screens in 2021, and teens ages 13 to 18 spent nearly 9 hours a day. Although the 1998 Children’s Online Privacy Protection Act (COPPA) sets 13 as the minimum age for having a social media account, users are allowed to self-report their age, and, as a result, large numbers of children ages 12 and under use social media.

Thus, enforcing rules around technology use has fallen almost entirely on parents. Limiting technology use is a crucial task for parents given links between excessive use—especially social media—and depression in both correlational and experimental studies. Facebook’s own research found that Instagram made body image issues worse for 1 in 3 teen girls. Particularly because so many children and teens have their own devices, parents face many challenges in regulating their children’s technology use.

These challenges may be greater for mothers and fathers in some family types than others. Because stably married parents generally have more resources and a more consistent bond with the children in their household, they may be better able to handle the challenges of guiding and limiting teen tech use. Having stably married parents means that children are more likely to have access to greater parental resources in terms of time and attention, as well as a more authoritative parenting style marked by clear family rules and consistent rule enforcement. By contrast, single-parent families typically have fewer resources—both emotionally and in terms of time—to devote to their children, which may affect their ability to oversee their children’s media use and screen time. Moreover, stepfamilies are less likely to have the kind of stable ties and clear lines of authority between parents and children that are most conducive to establishing clear and consistent discipline. For these reasons, children being raised in non-intact families may have fewer rules guiding their use of technology and more exposure to that technology.

The Teens and Tech Survey

The Institute for Family Studies and the Wheatley Institute surveyed 1,600 U.S. tweens and teens, ages 11 to 18, who were attending 5th through 12th grade in May 2022. The Teens and Tech Survey, fielded by Ipsos, covered a range of topics related to media consumption, family structure, and the mental health of adolescents. The tweens and teens in our sample reported using digital media (social media, gaming, online shopping, video chat, and texting) a total of approximately 10 hours and 4 minutes a day, on average. Although some of this time may include multitasking (doing two or more of these activities at the same time), this is still a staggering amount of time considering the time children spend sleeping, eating, going to school, watching TV (which was not included as digital media), and participating in extracurricular activities. 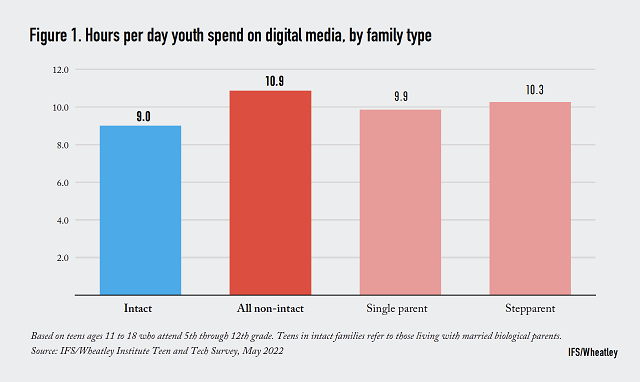 Why might family structure influence technology time? One possible reason has to do with family rules. Youth in intact families are more likely to report that their families have rules around technology use, including not allowing electronic devices in their bedrooms after bedtime, not allowing screen use during family meals, and limiting the time youth spend on social media (see Figure 3).